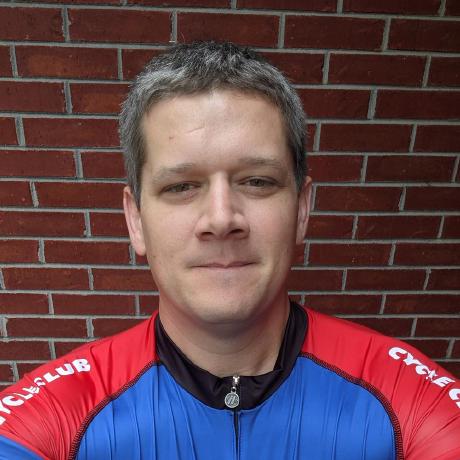 So, it’s been a long while since I’ve posted anything here (3 years and change).

Aside from the whole pandemic and all, I’ve undergone a few changes as well, and I thought it might be easier to approach a topic that can be awkward for some people here to avoid at least a few people trying to dance around said topic.

So it’s time for the proverbial “some personal news”.

Before I go any further…

I’ve dropped a little over 70 pounds since January 2020. No, I didn’t really approach it with weight loss as the goal. I’m happy to talk about it, but don’t expect me to have some miracle advice.

I rode my bike a lot back in middle school and again in college. Doing high school in Knoxville, Tennessee, was not particularly conducive to riding because I lived in an extremely hilly suburb and didn’t yet have the freedom to drive myself to somewhere rideable (and I had no idea that specializations further than road biking and mountain biking existed, and my entry level hardtail was not suited for the mountain biking trails around there, nor was I in any shape to do it).

So, come around to 2019 and my wife was asking me if I was ever planning to get back on the bike (she wanted the garage space back!). I got back on it a little bit but then changed jobs. Unfortunately I then fell back off when the new job had morning-heavy meetings and the Alabama summer heat kicked in. Trust me, riding in 90+ °F weather with dew points in the 70s is not fun in my current shape, let alone when I was that much heavier! But at least the bike was tuned up and rideable again.

So then the 2020 lockdown (such as it was in Alabama) came in to play, and like everyone else, I was getting stupidly stir crazy staying at home for everything except grocery store runs and the occasional nature walk with the kids.

Then in early April, I switched jobs (to the same one I’m at now), and most of the meetings are in the afternoon my time (my teammates are mostly based on the Pacific coast of the USA), freeing me to do some riding in the morning before my teammates were awake.

Then, on July 2, mechanical disaster struck. I think it was a bent wheel, but I don’t remember exactly. Either way, that bike was out of commission for a while.

I was getting extremely stir-crazy (again) to be deprived of my best chance to get the hell out of the house, and I eventually convinced my wife to let me get a used 2011 Specialized Tarmac Comp (I happened to stumble across it on Facebook marketplace on the day it was posted) for a hell of a deal. The owner had made some definite improvements (replacing the crank set, upgrading to Shimano RS80 carbon wheels, etc) but had left it idle in his spare room for a few years while he focused on running.

I picked it up, stopped by my LBS [local bike shop] to buy some platform pedals, drove it home, and took it for a shakedown ride and was immediately hooked. It was so much faster!

But then I took it out the next morning for a longer ride and didn’t even make it out of the neighborhood when the pulley wheel (a $20 plastic cog) broke in half. Yay. Luckily, my LBS had replacements in stock and I was back in action 4 days later and my speeds immediately jumped from 12-14 MPH to 15-17 MPH (total speed, not moving speed). I belted out my first 25 mile ride the next weekend and didn’t look back. By this point I was down 28 pounds since January and definitely got some comments from the few friends in our bubble that we routinely saw. I was awkwardly trying to brush them off but it definitely felt good.

Enter August 2020. I was really hitting my stride on the road bike and blasted out 531 miles. That remained my highest monthly total until 2022. I was pretty proud of myself. I also dropped past the 35 pound threshold.

September was largely more of the same (and almost hitting 45 pounds down).

In November 2020, I was doing a routine ride when the rim of the back wheel of my road bike effectively bent out sideways. Since those were carbon wheels, they were effectively unfixable. Time for some new road wheels!

2021 was mostly carrying along the same way until March 2, when I was riding on the bike path next to a 5-lane road and a woman driving a light blue Honda Accord turning left into Dunkin’ didn’t actually look to see if the driveway was clear before she made the turn. I successfully avoided getting hit, but I didn’t stay upright. I ended up landing hard on my left elbow. She didn’t even check to see if I was ok. I was running on pure adrenaline at that point and rode home, but it wasn’t until I got home that I realized that it was bad.

I ended up getting an x-ray 2 days later (that’s when the first appointment was and I didn’t think it was bad enough to warrant a trip to the ER). It turns out I broke the elbow end of my left radius bone. It was a small fracture and I had far better movement than the doc thought I should have, so I avoided surgery and a cast. I was just out of contention for 6 weeks.

My LBS guy (who we were already friends with after co-hosting multiple baby showers at their house; he has me in his phone as “Drew the beer man”) was nice enough to lend me a trainer (basically a gadget that lets you ride a real bike as if it were a stationary bike) and it was better than nothing but holy fuck it was boring. The only way I could tolerate it was to watch live sports (yay March Madness) and zone out. I put about 100 miles on it during my time out (all sitting completely upright so I didn’t try to put any weight on my arm). I ended up gaining back 5 pounds of that loss, which isn’t terrible by any means.

I had to take more breaks after that to work my arm back into shape, which led to a bit of a plateau which basically meant I didn’t lose that weight again until September 2021.

I had 3 spoke failures in 6 months ending in November 2021. The manufacturer sent the wrong spokes to replace them, so my road bike was out of service from then until July 8, 2022! The manufacturer belatedly made it right by replacing the wheelset entirely (I had to pay return shipping) at no additional cost.

I ended up 2021 beating my total from 2020: 3618 miles, but weight plateaued at about the 60-62 pounds down mark. I was definitely happy with my progress but still wanted more. I could fit into men’s large T-shirts for what I think is the first time in my life. I’m a child of the 90s and the days of baggy T-shirts; I think I went straight from youth XL to men’s XL. It was not a pretty time.

Enter 2022. In Februray, given that the supply chain was not fully up to snuff, my wife told me to go talk to my LBS about getting a gravel bike (mostly for the more rugged wheels). I went in anticipating that there would be a several month delay; after talking about various options and him calling his Marin rep, I ended up putting a down payment on a 2022 Marin Headlands One. Two weeks later, I had my new bike.

It’s an absolutely wonderful bike. It’s versatile, reasonably fast (but the Specialized still crushes it on the open road), and it really let me explore the Wheeler National Wildlife Refuge, which has about 30 miles of car-free gravel split in two sections. It’s stupidly flat and a lot of fun.

Since I got the road bike back in July, I’ve been doing a mix of road bike and gravel bike on the suburban roads around me and trying to hit up Wheeler at least once a month for some off-road fun. I haven’t used the Bobcat too much mainly because it’s a half-hour drive to Monte Sano State Park, which has some truly excellent MTB trails, but it’s hard to justify the extra hour when I can go faster from my front door.

I also introduced my sister to gravel riding (she is a paraclimber for Team USA) after she wanted to rent a recumbent or handcycle but nobody rents any here. She’s hooked too now and bought herself a Trek electric gravel bike (needs the motor assist for her degenerative muscle disease flare-ups).

That’s great, but what was missing?

Note that I didn’t say anything about dieting above. I specifically did not try to change my diet, although I’ve definitely reaped the benefit of less restaurant eating reducing my caloric intake. My diet wasn’t that unhealthy in terms of balance before, but it was definitely too much all around.

Also I was diagnosed with sleep apnea in summer 2019, so being on a CPAP likely improved my sleep quality, making it easier for my body to recover.

So what are my thoughts on weight loss?

Seriously, all diet plans are bullshit. There is no magic bullet that will work for everyone. Instead, here’s what I found works for me:

What about thoughts on cycling?

Ride what you love and have fun doing it. Don’t be afraid to try different disciplines (cross-country, enduro, road racing, gravel,downhill, etc.) and see what tickles your fancy.

I’m by no means the first person to say this, but when you’re buying a bike, focus on the frame first. You can replace almost every other component later.

A good pair of shorts is worth every penny. Try the entry level ($40-50 on sale) from a few different brands and see what fits you better. Saddle and chamois fits are extremely personal, and what works for me (Pearl Izumi) won’t work for everyone.

OK, this has gone on long enough. Any closing words?

YES! If you’re coming to DjangoCon US 2022, join our Strava club and ask if anyone is up for a ride in the #outings channel on Slack.

Other than that, support your local bike shops (many of whom will happily speed up your labor for a six pack of good beer), and have fun out there!